The GST (Gilt Silk Twist) is done on all the jacket pieces.
Total time GST: 677.5 hours, within half an hour or so.
Total time so far on the entire jacket project: 2708.5 hours (previous jacket took 1947 hours).
Spools GST used: 19.
Waste gilt saved from thread ends: 1 gram.

I've detailed how I did buttonhole stitch with the GST in previous entries on the jacket (search using the tab "jacket"); it's a two-hand method that minimizes the amount of GST pulling against itself, which reduces breakage and makes for a closer, more raised stitch with a pleasing look and feel. 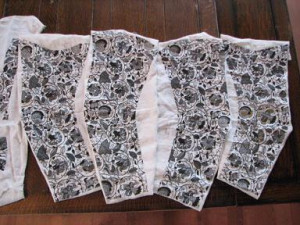 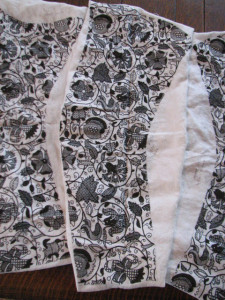 I used a back-and-forth stitch, rather than working over a foundation thread.  When I started working on the GST, I initially used the motif outline in black silk as the edge, but I found it pulled the motif out of shape, and it lost the clean edge feel created by the black outline.  I didn't want to work backwards chain stitch around all the edges, as some of the fill pieces were very small, so I did a simple backstitch outline in the GST, which actually worked very well.  I slide over and under the GST outline as I work the buttonhole stitch back and forth, and that is sufficient to stabilise the motifs.  For the circular motifs, I worked counter-clockwise in a circle until I reached the center.

The GST has a nap, I discovered; I stroke the thread once I've cut it off the spool to straighten out the curl, and there is definitely a smoother end.  I run the thread between the same fingers in both directions - this helps to identify the smoother direction, as the feel is quite subtle.  It seemed to reduce the breakage significantly, and I found the gilt did not bunch up on the thread.

For the GST, I used a gold head needle rather than the Japanese needle I'll be using for the gilt thread, as the GST likes to slip out of the eye of the needle.  I bought two packages of gold eye needles, and worked with each one until I found the smoothest one that broke the thread the least.  I prefer a long needle to do the buttonhole, and then I switch to a short needle to tie off the threads and work them into the underside of the embroidery.

I saved all the waste thread, just to see how much gilt I would have by the end of the GST, stripping the gilt from the silk thread as I went.  This was to work out how much gilt there would be, and working under the assumption that in Elizabethan London, all the gilt thread waste would be sold back to the goldsmiths by weight.  I ended up with 1 gram just from the GST, so economically, it makes a lot of sense to collect up all the leftover gilt.  I think in period, the threads would be burned to dispose of the silk, saving only the metal, as I can't think of a good use for a bundle of tiny silk fibers. I don't think they were felting silk leftovers, and I haven't found any record that they did so, but you can't prove a negative, so maybe they saved the silk as well.  Anything the embroiderer's shops could sell to someone else for money would be saved.  Gold has an obvious value, of course, and gilt thread is expensive, so why not try to get some money back from the leftovers?

The longest waste thread was about 3 inches, but that's because I'm not a professional embroiderer.  The shortest thread pieces I saved were about 1/4 cm.

Finally, I had to get a feel for how long my thread was; it's quite easy for the GST to catch on something or slip-knot itself on the underside of the embroidery.  I checked often, and even so, had three or four instances were I missed a small loop.  In the cases where I was too late to fix the mistake, I secured the loops on the underside of the embroidery.  I encountered a bad case of this on the Plimoth Project; I don't know who, but someone working on a frame before me had managed to get a whole bunch of slip-knots on the back of their work, and it took me an hour to fix all of those mistakes.  Soem of them I was able to work through and back into the embroidery, others I had to fix in place by sewing them down with extra thread.  It's annoying, and knowing to look out for it helps save time and thread.  JFYI.

And there you go.  Easy!
Collapse