I thought I'd stick with the whole "pudding" theme this week.  No post yesterday, because yesterday was my birthday, and I was busy shopping and watching Mockingjay with Bob.

(It's a pretty good movie.  I thought it was worth watching in the theatre, even in 2D.  I refuse to do Imax because I like my hearing, and prefer to lose it naturally, rather than having it blasted to smithereens by Imax surround sound.) (My hearing is bad enough as it is, thanks to childhood ear infections and scarring.) 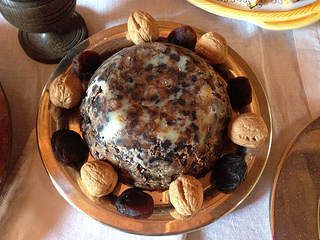 So... fig pudding.  Like the pease pudding, it's cooked in a water bath, either by tying it up in linen or muslin and directly boiling, or by cooking in a bowl put in the water (essentially, a double-boiler effect).  In this case, with the sweet pudding, it's better cooked in a bowl, so you don't lose the flavour of the figs.  Now as to the length of time it's been a pudding, rather than, say, a fruitcake-like thing, it's harder to say, though Wikipedia rather unhelpfully claims it's a 16th century dish, but that's definitely a [citation needed] entry. The fifteenth-century recipe* I have uses raisins and dates in addition to the figs, having all the fruits mixed with eggs, fat, flour, and breadcrumbs, and worked into a dough that is then boiled in water (and then suggests you can warm slices of the pudding on the griddle).  I prefer it with just the figs, as it's an excellent connection with something the Jamestown Settlement & Museum visitors know - "Oh, bring us some figgy pudding" from the carol We Wish You a Merry Christmas - and it is a proper period dish made with just the figs.   My experience with the pudding was that it tastes very much like a Fig Newton.  Without further ado:

Ingredients:
2 cups dried figs, chopped small
1 cup lard or suet, if you can get it (it's better with suet)
1 cup flour
1 cup fresh breadcrumbs (crumble up some bread; it needs to be fresh, not dried)
1 egg, beaten
2 Tbsp milk
Lard, for greasing the pudding bowl

In a medium bowl, combine figs, lard, and breadcrumbs.  Beat the egg and milk together, and add to the fruit mixture, adding more milk if needed to make a stiff dough.  Grease the pudding bowl heavily (be generous; you want the cooked pudding to come out of the bowl), and pack the dough in firmly, flattening the top evenly.  Fill the saucepan half-way with water.  Cover the pudding bowl tightly with foil and place in the 6-qt saucepan, making sure the water doesn't come up more than 2/3 of the way up the bowl.  Bring the water to a boil, them simmer for 3 hours, checking the water every half hour, adding more water if needed.  Do not allow the pan to boil dry.

Once the pudding is cooked, immediately turn it out onto a plate.  Serve warm or cold.